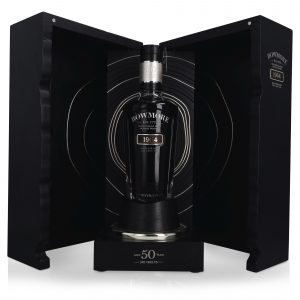 Bowmore is one of the oldest Scotch whisky distilleries in Scotland. Featured in Sotheby’s upcoming Finest & Rarest Distilled Spirits auction is a Bowmore Black bottle (59 of 159). The 50-year-old bottle of Scotch was among the Bowmore bottles donated by Beam Suntory, owners of Bowmore Distillery, to Louisville’s Speed Art Museum in Kentucky. The 20ml bottle is the oldest of the 1964 editions and the last to be released of the Bowmore Blacks. The lot comes with a black wooden presentation case.

Another notable Scotch whisky on offer is from the Brora distillery. This distillery operated from 1819 until its closing in 1983. It reopened again earlier this year. Offered in this Sotheby’s auction is a limited edition 40-year-old bottle of single malt whisky that was made in 1972 and numbered 150 out of 160. View the entire catalog of spirits and register to bid by visiting Sotheby’s.