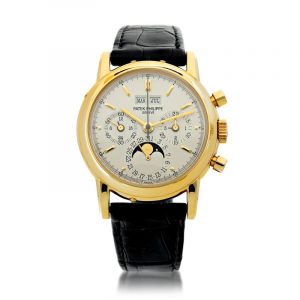 In the early 1980s, Rolex decided to move away from manual winding movements and introduce a new design— an automatic chronograph movement. To develop such a model, Rolex collaborated with Swiss luxury watchmaker Zenith. In 1988, they created the first-ever automatic Daytona ref. 16520 watch with a robust case. An example of that Rolex Zenith Daytona will be available in the upcoming Watches auction, presented by Sotheby’s.

In 1967, the Rolex Sea-Dweller ref. 1665 watch was launched with an intent “to push the boundaries of underwater and diving technology to its limits.” This watch was mainly designed for commercial divers. Its key features include a helium escape valve which allows helium to be released at a given pressure while preserving the watch’s case. A Patek Philippe ref. 3970E timepiece from 1992 is also showcased in the sale. The offered lot has a perpetual calendar, moon phases, and leap year indication. Those interested in this or any other lot can register to bid on the Sotheby’s website.