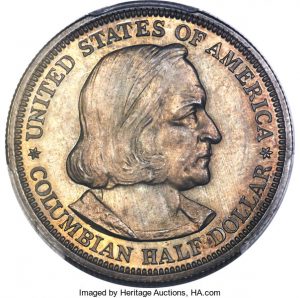 To commemorate the 150th anniversary of Captain James Cook’s discovery of the Hawaiian Islands, the Hawaiian government issued 10,008 half dollar coins. The upcoming Classic Silver and Gold Commemoratives US Coins Monthly Online Auction presented by Heritage Auctions features one of these 1928  Hawaiian coins. On one side, the coin shows a left-facing bust of Cook. The other side of the coin depicts a Native chief at the top of a hill, clad in a feather cloak and holding a barbed spear.

Another leading lot in the sale is a 1949 fifty-cent Brooker T. Washington coin. Designed by African American artist Isaac Scott Hathaway, the coin features a three-quarter facing bust of Washington on the front. Below the bust is the subject’s name arranged in an arc. ‘From slave cabin to hall of fame’ is inscribed on the back. Other notable lots include a Vancouver half dollar designed by Laura Gardin Fraser, which was issued to honor the 100th anniversary of Fort Vancouver. Also available are several 1892 and 1893 Columbian half dollars, the first commemorative coins issued by the United States. These coins marked the World’s Columbian Exposition in Chicago. To view the complete collection and register to bid, visit Heritage Auctions.