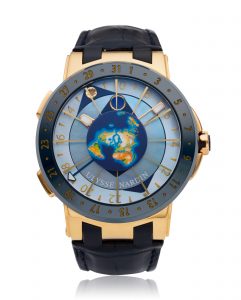 The Rolex Daytona Cosmograph tracks miles per hour, starting at 50mph and going as high as 200mph, and also shows expired time. These two features, among others, make it a useful watch for race car drivers. An example of the Cosmograph from 1973 is featured in the upcoming Watches Online auction, presented by Christie’s. This watch was previously owned by the late driver and race car engineer Carroll Smith. His career accomplishments included prepping GT40s that would win both the 1966 and 1967 24 Hours of Le Mans.

Those interested in newer watches can consider a Ulysse Nardin Moonstruck ref. 1062-113 produced in the last decade. As its name implies, the Moonstruck’s functions particularly benefit those interested in astronomy. Key features include dials showing the location of Earth’s Moon and Sun in relationship to the planet. Meanwhile, collectors who prefer antique watches will find a Patek Philippe Calatrava from 1961. The Calatrava series has a minimalistic design and is only intended to show the time. Those interested in this or any other lot can register to bid on the Christie’s website.