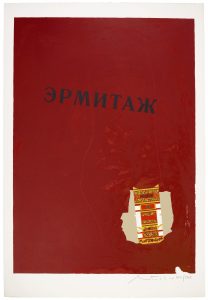 Robert Motherwell was an American painter and printmaker known for his articulate paintings in the Abstract Expressionist style. He is most famous for his series of oil paintings titled Elegy to the Spanish Republic, which featured black figures on white backgrounds. In 1981, Motherwell founded the Dedalus Foundation. He wanted to use this platform to “support public understanding and appreciation of the principles of modern art and modernism.” Highlighted in the upcoming Robert Motherwell Prints from the Dedalus Foundation auction is a 1979 lithograph from the artist titled Elegy Study. The lithograph was initialed and numbered in pencil. This is one of 12 Motherwell proofs that used Roman numerals.

Also featured in this Christie’s auction is a Robert Motherwell lithograph on handmade paper titled Samurai. This 1971 piece is signed and annotated Proof A in pencil. The lithograph shows a black form on white paper. A colorful lithograph and collage titled America – La France Variations II is available as well. This 1984 piece is signed and numbered 56/70. Visit Christie’s to view the entire collection and to place a bid.