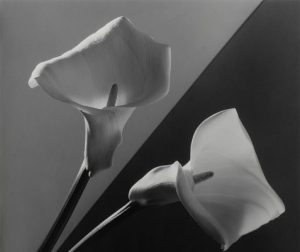 In the upcoming photography auction, presented by Hindman, Robert Mapplethorpe’s black-and-white photograph titled Calla Lily will be available for bidding. This particular piece comes from Mapplethorpe’s series of flower photographs, which were taken throughout his career. These images represent his fascination with nature’s beauty, a departure from his previous focus on human figures. In this photograph, the artist creates a juxtaposition of white and black tonalities.

Shirin Neshat’s Water Over Head from the “Soliloquy” series will also be available in the live event. A contemporary Iranian visual artist, Neshat’s photographs address the issues of gender, identity, and politics in Iran. The offered lot shows a woman kneeling at a basin of water as she washes her head. Hindman has also brought together works from prominent artists such as Alex Prager, Yousuf Karsh, and Adam Fuss. To find more information about the available lots, visit Bidsquare.