Rare Minerals, Fossils, & Meteorites Will Come to Auction With Sotheby’s 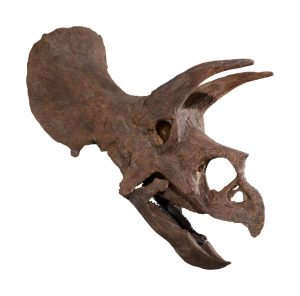 The upcoming auction, presented by Sotheby’s, offers 85 lots of minerals, fossils, and meteorites. A highlighted piece in the collection is a Triceratops skull. According to the lot essay, it is one of the largest Triceratops skulls to have ever been discovered intact in a single block. The Triceratops, a large herbivore dinosaur, had two horns rising from its forehead with a shorter horn stemming from its nose. A massive bony collar behind the skull protected the head, shoulders, and neck from any kind of attack by predators such as the T-Rex.

Another standout piece is a large specimen of purple labradorite. Labradorite was found by Moravian missionaries in the Labrador region of Canada in 1770. According to Inuit traditions, the mineral can treat a variety of ailments. Inuit legends tell that labradorite fell from the frozen fire of the aurora borealis. Visit Sotheby’s to view the entire collection and register to bid.