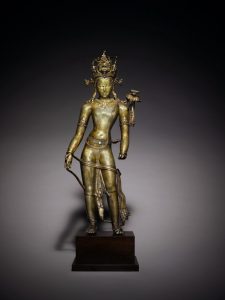 Manjushri is the oldest bodhisattva in Mahayana Buddhism. Manjushri is often shown carrying a sword and Prajnaparamita scripture in each hand. This ancient bodhisattva represents wisdom and youth. The upcoming Sotheby’s auction will present a rare Tibetan 12th or 13th-century figure of Manjushri. While most Manjushri figurines appear seated on lion skin, the available figure stands upright. Another highlight is a gray schist figure of a bodhisattva from the Gandharan region. The 3rd or 4th-century figurine demonstrates how Classical Greco-Roman techniques blended with Indic and Buddhist sculptures. This Hellenistic and Indic art combination emerged from the Gandharan school of art during the rule of Alexander the Great. A halo rests behind the head of the available bodhisattva.

Bidders will also find a Bhagavani Sitatapatra mandala featuring a central three-faced goddess in red, blue, and white. She holds a wheel, bow, arrow, and other elements. More than 40 other spiritual figures encircle the central deity. An inscription on the back suggests that Lhachog Sengge made the mandala painting for his teacher, Konchog Pelwar. The sale will also feature Southeast Asian figurines, Nepalese sculptures from the 13th century, and regional paintings from India. Interested collectors can explore the entire catalog and register to bid online on Sotheby’s.