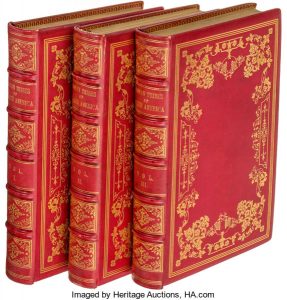 The Rare Books Signature Auction, offered by Heritage Auctions, includes a selection of over 450 books, documents, and related pieces of decorative art. This sale features The Federalist: A Collection of Essays, Written in Favour of the New Constitution, as Agreed Upon by the Federal Convention (later known as The Federalist Papers). This version of The Federalist is a first-edition copy and was personally gifted by James Madison to James Maury, who was an early United States diplomat.

Also up for bid is a first-edition copy of Leaves of Grass by Walt Whitman. The book of poetry was originally released in 1855 as a set of 12 poems, published anonymously. Whitman would later build on the original poems and add more to the collection. The available lot is bound in green cloth with gilt floral decorations. Inside the front cover is a portrait of the poet, printed directly on heavy paper.

There are many religious works presented in this sale, especially those from the Mormon church. One example is A Collection of Sacred Hymns, for the Church of Jesus Christ of Latter-Day Saints, selected by Emma Smith. She was Joseph Smith’s wife, and this collection of hymns is said to have been directed by revelation. Also in this sale are early copies of Key to the Science of Theology, Doctrine and Covenants of the Church of the Latter-Day Saints, and The Book of Mormon. View any of these lots and register to bid on Heritage Auctions.