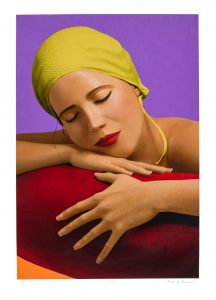 The Summer Refreshments auction will offer a selection of prints and multiples, including those from Leo Castelli’s 90th birthday. Castelli was responsible for giving artists such as Roy Lichtenstein, Andy Warhol, Jasper Johns, and Donald Judd their first solo shows. At the top of the auction is a 1997 Roy Lichtenstein screenprint that was created for the event. This colored screenprint of a room centers on a partly-transparent chair and is signed in pencil by the artist.

Also highlighted is a screenprint by Andy Warhol discussing the 1963 assassination of President John F. Kennedy. This 1968 piece is titled Flash and shows the United States presidential seal, along with an embedded portrait of Jackie Kennedy and a photo of the rifle used to kill the President. Three etchings by French artist Pierre-Auguste Renoir can also be found in this Bonhams auction. The etchings, titled Sur la plage, à Berneval; Le chapeau épinglé (La fille de Berthe Morisot et sa cousine); and Baigneuse debout à mi-jambes were respectively created in 1892, 1894, and 1910. Visit Bonhams to view the entire collection and to place a bid.