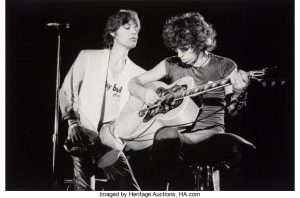 The upcoming Photographs auction from Heritage Auctions contains several prints by well-known artists. Most of the photographs are monochrome prints, including two lots each stamped “special edition” on the verso by Ansel Adams. A photographer and environmentalist, Adams was best known for his images of the American West. The two lots for sale in this auction—Cathedral Spires and Rocks, Late Afternoon and Oaktree, Snowstorm— were taken in Yosemite National Park, one of his most-frequented locales.

Also available in this sale are portraits of artists and celebrities, including images of Marilyn Monroe, Frida Kahlo, Mick Jagger, Keith Richards, The Beatles, and Rita Hayworth. There are also a number of photos made by or for government agencies, including a footprint in the lunar soil (NASA), the Baker Day explosion of the fifth atomic bomb (U.S. Navy), and several farmworker photos from the Library of Congress. A print of the notorious Eddie Adams photo titled Street Execution of Vietcong Prisoner, Saigon will be presented as well. View any of these lots and register to bid on Heritage Auctions.