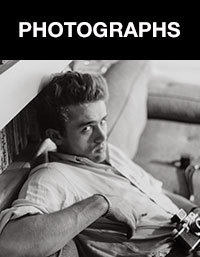 A world-renowned landscape photographer and environmentalist, Ansel Adams is best known for his black-and-white photographs of the American West. Adams was given a camera at the age of 12 while visiting Yosemite National Park for the first time. The park would go on to play a significant role in his artistic journey. The upcoming Photographs Monthly Online auction, presented by Heritage Auctions, will showcase several Adams photographs of Yosemite National Park. One of them is Moon and Half Dome (1960), taken on a winter afternoon. The piece shows the rising moon above a shadowy cliffside. The gelatin silver photograph was printed later by Alan Ross.

Another key lot is titled Marilyn Monroe in a Deckchair by Frank Worth, an American photographer known for befriending Hollywood stars and capturing them in candid moments. His style was unconventional for the time, as many film celebrities preferred posing for glamor shots. To view the complete catalog and register to bid online, visit Heritage Auctions.