Photographs, Manuscripts, and Rare Editions on Offer at Freeman’s 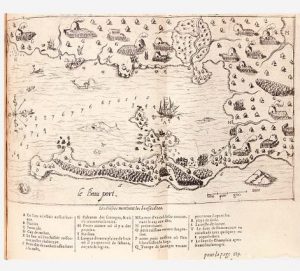 A French explorer, cartographer, and the “Father of New France,” Samuel de Champlain published his second book in 1613 detailing his expeditions in the New World. Titled Les Voyages du Sieur de Champlain, he gives an account of his travels along the Atlantic coast and into Canada. De Champlain also describes the establishment of a permanent French settlement in Quebec. A first edition copy of Les Voyages is up for bid in the upcoming Books & Manuscripts auction, offered by Freeman’s.

Though books and manuscripts lead the sale, there are also many photographic works from Ansel Adams, Henri Cartier-Bresson, and Mark Cohen. Another notable item in the event is a draft of a telegram signed by First Lady Mary Todd Lincoln to Mr. Augustus Gumpert [sic]. The telegram is addressed to Barnum’s Hotel in Baltimore, the hotel where John Wilkes Booth conspired to assassinate the president.

Other items in the sale include a first special edition copy of A Farewell to Arms by Ernest Hemingway, a first English edition copy of Ada or Ardor: A Family Chronicle by Vladamir Nabokov (inscribed with a butterfly drawing), a graphite drawing of Toad in a bathing suit for the book Frog and Toad Are Friends, and more. View any of these lots and register to bid on Bidsquare.