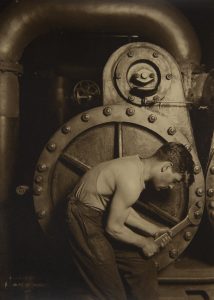 An American photographer and sociologist, Lewis Wickes Hine often wielded his camera as an instrument of social change. In the 1910s, the National Child Labor Committee used Hine’s documentary-style works to advocate the elimination of child labor in the United States. A rare vintage print of Lewis Wickes Hine’s Mechanic and Steam Pump from 1921 is among the key highlights of Christie’s upcoming photography auction. This image marks the artist’s shift from a hard-hitting documentary style to what he called ‘interpretive photography.’ This image of a Pennsylvania Railroad mechanic illustrates the symbiotic relationship between human civilization and mechanization.

Another noteworthy lot is Man Ray’s Le Violon d’Ingres from 1924. This image is among the most famous photographic works of the 20th century. Ray’s lover, Alice Prin, posed as the model in this image. Through this photograph, Ray pays tribute to Jean-Auguste-Dominique Ingres’ nude paintings. The sale also offers Danny Lyon’s Cal, Elkhorn, Wisconsin from his famous Bike Riders series. To view the complete catalog and register to bid online, visit Christie’s.