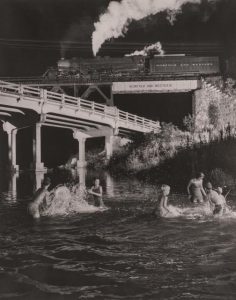 In the 20th century, Henri Cartier-Bresson introduced a new style of photography that helped establish photojournalism as an art form. According to Magnum Photos, he explained his approach in these terms: “For me, the camera is a sketchbook, an instrument of intuition and spontaneity. It is by an economy of means that one arrives at simplicity of expression.” A photograph captured by Cartier-Bresson’s lens is featured in the upcoming auction offered by Doyle.

Besides the work of Cartier-Bresson, this photography sale will also present items from Richard Prince. One of his photos depicts a cowboy with his lasso from Prince’s Cowboys and Girlfriends series. Other available items include Substrat 2 I by Thomas Ruff.  This photograph pushes the boundaries of photography by capturing abstract forms rather than reality. To bid for the above-mentioned items and more, visit Doyle.