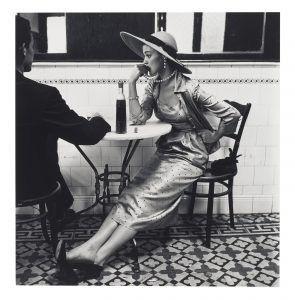 Peter Beard was a wildlife photographer whose affinity for the African wilderness was expressed in his photographs. He is today recognized for the documentation of Africa’s imperiled wildlife. By the 1970s, Beard had created his trademark by combining photographs, text from his daily journals, and found objects such as dried leaves, insects, and newspaper cuttings. Some of his works were also decorated with animal blood, and even with his own blood. Offered in Christie’s upcoming Photographs sale is a black and white image by Beard, framed and signed in white ink. This 1987 photo shows a nude woman feeding a giraffe at Hog Ranch.

Parade, Hoboken, New Jersey, a photograph by prominent Swiss photographer, filmmaker, and author Robert Frank, is also presented. Frank was best known for his emotive and expressive approach to photography. This gelatin silver print was captured in 1955. Along with Frank’s work, a selection of photographs by Robert Mapplethorpe, Elliott Erwitt, and Irving Penn are also offered in the sale. Interested collectors can explore the full listings and register to bid online on Christie’s.