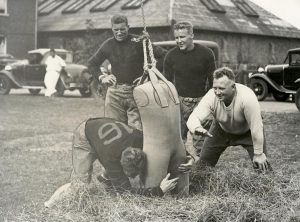 Though the National Football League was formed in 1920, several years passed before it grew in popularity. Indicative of the spectacle of college football, the first stadiums at Harvard, Yale, and Princeton were fashioned after classical Greek stadia and the Roman Colosseum. Sports photography from this period often attempts to capture the grandiosity and athleticism of the Olympian, as can be seen in the photographic pieces for sale in this upcoming Artelisted event.

Of the many action shots in the collection are several capturing American football rivalries, such as one showing an unnamed player running through the line of a game between USC and UCLA around 1942. Other game photos include game information and a photo description on the reverse, including one depicting a match between Notre Dame and Northwestern: “With the Big 10 Championship tucked away, Northwestern University, undefeated this season, saw a national title snatched from its grasp when the fighting Irish of Notre Dame beat the Wildcats 26-6 at South Bend, Ind.”

One of the more unusual photos from the collection is that of two Los Angeles firefighters attempting to pass a football while somewhat precariously climbing a firefighter’s ladder. The reverse of the photo states that the photo was taken at the “famous Los Angeles fireman’s Football tea.” There is also an action photo from a children’s football game where the youngsters appear to be as enthusiastic as their older counterparts, though the football itself is nearly a third the size of the players.

The sale includes many more game shots, team shots, as well as individual photos of players, both named (Pinkie Schmidt, Bill Jummin, Fritz Graflund, Jerome Holland, etc.) and unnamed. Though most of the photos are original prints, there are also more than ten postcards up for bid. Schools represented include Cornell, Colgate, Notre Dame, Princeton, Harvard, Holy Cross, and more. View any of these American football photos and register to bid on Artelisted.