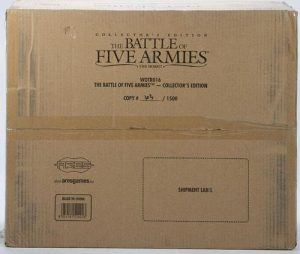 Peter Dean was a software developer who spent his free time collecting and playing board games. He often obtained early editions, special editions, or supporting editions from Kickstarter. After his passing, Dean left behind his extensive collection of games and miniatures. Turner Auctions will present part of his collection in the upcoming Peter Dean Estate of Fantasy/ Sci-Fi Games, Part 1.

Many of the available fantasy games are rare or early editions, including the Collector Edition of The Hobbit: The Battle of Five Armies. Though the game has recently been re-released, the available lot is number 303 from the original hand-numbered edition of 1,500. Based on the end of Bilbo Baggins’ quest from the J.R.R. Tolkien fantasy epic, the game uses the mechanics first developed in the War of the Ring game. Other featured fantasy game titles in the sale include Star Wars the Card Game, Star Craft, Eclipse: Second Dawn for the Galaxy, and others. View any of these lots and register to bid on Bidsquare.