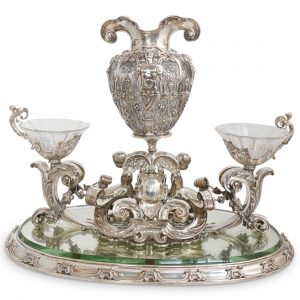 George Paulding Farnham was an American sculptor, metallurgist, and jewelry designer who collaborated with Tiffany & Co. from the late 19th century through the early 20th century. His designs, such as the Adams vase (1893) and the Admiral Dewey sword (1898), gathered significant acclaim. One of Paulding Farnham’s works is available in The Fall Collection auction, hosted by Akiba Antiques. Produced around 1905, the offered sterling silver centerpiece features a Renaissance Revival pattern. Winged putti figures decorate its handles.

The upcoming live sale features a range of decorative porcelain vases, sculptures, and urns. Among them is an antique silver repoussé samovar. Repoussé is a metalworking technique. This method involves hammering the reverse surface of a metal piece to create a low-relief design. Beyond decorative art, the auction presents fine art from René Portocarrero and Karel van Mander III. View more lots and register to bid online on LiveAuctioneers.