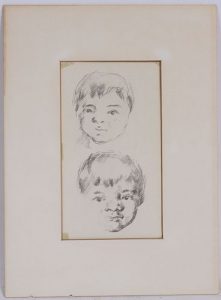 Paul Cézanne is one of the most influential Post-Impressionist artists in the history of modern painting. Over 40 years, Cézanne made over 1,000 paintings, of which nearly 200 are portraits. He often sketched his father, mother, sister, uncle, son, art dealer, himself, and Marie-Hortense Fiquet. Cézanne executed several painted and sketched portraits of his son, Paul Jr. One of these portraits will come come to auction with Nye & Company. It captures Paul Jr.’s childish features in three distinct drawings. One side of the piece bears a single sketch, while the other side has two.

The upcoming sale will feature works from several 19th and 20th-century American artists, including Frank Henry Shapleigh. Born in Boston, Shapleigh frequently spent winter at the Ponce de Leon Hotel in St. Augustine, Florida. The artist executed the available oil painting during his stay at the hotel. The large-scale oil on canvas depicts the old fort at Matanzas Bay in St. Augustine, Florida. Accompanying the painting is a letter from the artist to Charles Shultz. Beyond fine art, the catalog also offers early American furniture, English ceramics, Chinese porcelain, rugs, and lighting. Find the complete listings and register to bid on Bidsquare.