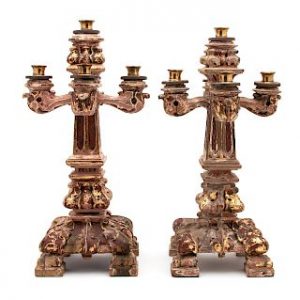 Known as the ‘Father of Danish flower painting’, Johan Laurentz Jensen, was the leading painter of floral still lifes in Denmark in the first half of the nineteenth century. The recipient of a traveling scholarship by King Christian VIII, Jensen’s still lifes have an eye for detail. A painting by the still-life artist is featured in the upcoming ‘Palm Beach Collections’ sale offered by Hindman Auctions.

A 17th Century Beauvais silk and wool tapestry depicting les enfants jardinieres and owned by Henry Morrison Flagler is another highlight of the auction. A rare Gorham Isis pattern antique silver bachelor suite of three is also  featured in the auction. Gorham’s rare Isis pattern was designed by their lead designer George Wilkinson in 1870. The functional end is connected with the handle through a conjoined cobra and vulture wings, the traditional symbol of the United Kingdoms of Upper and Lower Egypt worn on the pharaoh’s crown. The Isis pattern reflects the Egyptian taste in design. Other notable lots include rare books, antique European furniture, decorative arts, and much more. Browse the entire collection and register to bid on Bidsquare.