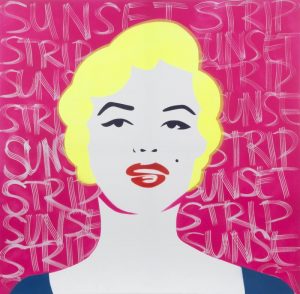 Born Norma Jeane Mortenson, Marilyn Monroe was one of the most famous sex symbols of the 1950s and 60s. She was famous not only for her dozens of films, but also for her relationships with playwright Arthur Miller and baseball star Joe DiMaggio. After battling mental health and addiction issues, Monroe died of a barbiturate overdose on August 4th, 1962.

Featured in the upcoming Julien’s Auctions sale devoted to Monroe is a work by graffiti artist Charles Uzzell-Edwards, also known as Pure Evil. This 2015 aerosol on canvas piece is titled Marilyn Monroe’s Sunset Strip Nightmare. It features a painted Monroe with yellow hair and a blue top in front of a pink background with the words “Sunset Strip” repeated behind her.

Also found in the Merry Merry Marilyn Online Only Auction is a 1987 semi-gloss finish print signed by George Barris, an American car designer. Barris met Monroe on the set of The Seven Year Itch. This print shows the actress crouched on a littered beach, wrapped in a mint green towel. Other items include a color photograph initialed by Hugh Hefner, a 1980s bust of Monroe’s head and shoulders, and a 1951 contract for Clash by Night. To view these items and to place a bid, visit Julien’s Auctions.