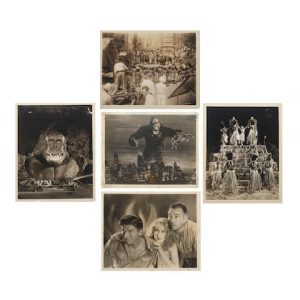 Warner Brothers purchased the rights to Everybody Comes to Rick’s (1940) from American playwrights Murray Burnett and Joan Alison. Hal Willis bought the manuscript for $20,000, a record-breaking amount at the time. The company then adapted the play into Casablanca (1942), starring Humphrey Bogart and Ingrid Bergman. A mimeographed copy of the original playscript will lead an upcoming Bonhams auction. The 101-page copy is bound with brads and has “Wharton & Gabel” type-written on the title page. “Important! Return Story Dept.” is stamped on both the title and cover pages.

Marlon Brando’s collection of scripts, notes, and letters for Apocalypse Now is another lot of interest. In a typescript letter from Francis Ford Coppola, the producer-director explains to Brando that he is re-doing Leighley’s character (Kurtz) in the film. He also goes on to convey his hopefulness about the prospects of the project. The collection includes Brando’s typescript notes on the character of Kurtz.

The sale also features a rare photographic archive of King Kong curated by collector Stanley Simon over five decades. It includes 268 silver gelatin images of behind-the-scenes and candids from the sets; film promotion portraits of the leading cast; movie stills; and photos of co-directors Merian C. Cooper and Ernest Schoedsack. To view the complete catalog and register to bid online, visit Bonhams.