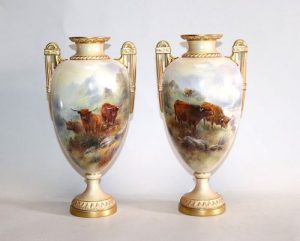 John Stinton’s family of painters worked for the British Royal Worcester firm for around 160 years. The artist was particularly known for his Highland Cattle landscapes. A pair of 19th-century decorated urns, painted and signed by John Stinton, is one of the key lots in the upcoming Nye & Co. auction. The double-handled urns depict Stinton’s signature rustic scenes.

A Chinese 18th-century Queen Anne armchair also highlights the listings. The rare piece of furniture seems to retain the slip seat in its original form. The carved hardwood armchair resembles some references published in The Decorative Arts of the China Trade by Carl L. Crossman, a renowned scholar and art collector. Another notable furniture lot on offer is a Chippendale mahogany block front chest. Named after English cabinetmaker Thomas Chippendale, this variety of furniture was in vogue in the late 18th century. It was the first time in English history that a furniture style was named after a cabinetmaker instead of a ruler. Fine art enthusiasts can consider South Quaker Hill Barn, an oil painting by Benjamin West Clinedinst. An oil study of a barn by George Reid Barton accompanies this lot. To view the complete catalog and register to bid online, visit Bidsquare.