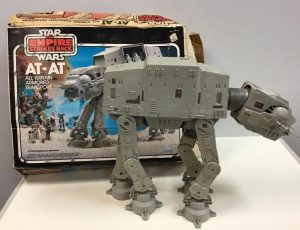 Few movies have broken through the generational wall like the Star Wars series. For decades, children and adults have been drawn into the inter-galactic battle between the Jedi and the Sith. Even still, the original trilogy of Star Wars movies, released between 1977 and 1983, attract a cadre of loyal fans who know each film by heart and covet any original memorabilia associated with the series.

Alderfer Auction is currently offering a collection of nostalgic toys from the original Star Wars trilogy, each reminiscent of a moment in galactic lore. One might fly across the galaxy with Han Solo and Chewbacca in the Millennium Falcon from Empire Strikes Back or fight the Empire as Luke Skywalker and R2-D2 in an ESB X-wing fighter. A collector who has gone to the dark side may defend the Death Star as Darth Vader in his black tie fighter.

More nostalgic toys from two other good vs. evil sagas of the 1980s have not been overshadowed by the Star Wars. The Masters of the Universe and Transformers also garnered loyal fans and collectible figures, which are available. Collectors may reenact classic confrontations between He-Man and Skeletor with their 1981 figures or recreate battles between the Autobots and Decepticons with a first-generation lot of 9 Transformers in a vintage case.