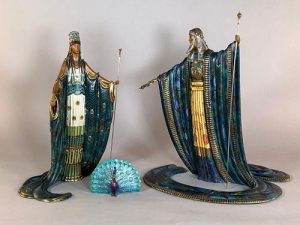 Roman Petrovich Tyrtov was the son of a distinguished Russian admiral and was expected to follow in his father’s footsteps. In 1910, though, he moved to Paris to become an artist. He changed his name to Erté to avoid bringing shame to his family. Now, Neue Auctions will offer numerous bronze works by Erté in the upcoming sale. This includes a late Erté piece depicting Zeus and Hera. Both figures are draped in long, blue robes that circle around their feet. Also available from Erté is the artist’s reimaging of Gilda from the Giuseppe Verdi opera, Rigoletto.

Work by Louis Icart will also highlight this sale. Like Erté, Icart found inspiration in Paris at the start of the 20th century. He is best known for his depictions of Parisian women. The etching Thoroughbreds by Icart shows a woman riding a horse. Her makeup and scarf provide the only color in the etching, guiding the viewer’s gaze in that direction. In Speed, Vitesse, Icart once again explores movement. Three greyhounds run forward as a woman holds their leashes, her clothes fiercely waving as they race. Those interested in this or any other piece can register to bid on Bidsquare.