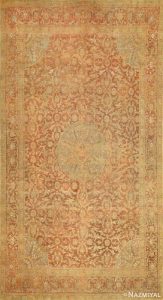 During the Mamlūk dynasty, Egypt’s economy and culture were at a high point. Cairene carpets were made during this period. Complex star shapes, octagons, or polygons were the central motifs of Cairene carpets. A few of them, still intact today, are displayed in places like the Metropolitan Museum of Art. This January, a 16th-century Mamlūk Cairene carpet will be offered by Nazmiyal Auctions, along with over 140 other vintage and antique rugs.

Merging art and weaving, a Persian Tabriz rug created around the 1910s also stands out. The defining characteristics of a Persian Tabriz rug are its ornamental patterns, noticeable colors, and thread count. An antique Turkish Oushak will be available in the auction as well. Oushak carpets originated in the region called Usak in modern-day Turkey. The star and medallion design have gained popularity since the creation of these rugs. Near the end of the 19th century, the demand for these carpets increased. Carpet collectors browsing the auction catalog can consider antique Islamic prayer rugs, as well as Persian, Turkish, Indian, Moroccan, Swedish, Scandinavian, and Native American Navajo carpets. View the full collection of vintage and antique rugs by visiting Bidsquare.