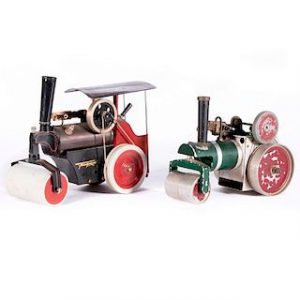 The upcoming Miller & Haas: Steam Engines & Comic Books auction is offered by Turner Auctions + Appraisals LLC.  This sale is assembled from the collections of Craig Miller and Robert Haas, featuring vintage steam engines, toy trains, and other antique toys. This auction will include engines and turbines as well as a two-man saw, a sausage maker, factory machines, windmills, and a Ferris wheel. The O gauge toy trains for sale include manufacturers such as KBN, Issmayer, Hornby, and Ives.

Also available is an assortment of comic books from Dell, Walt Disney, Classic Comics, Classics Illustrated, and more. Tarzan and the White Savages of Vari was the first Tarzan comic issued from Dell, this lot bearing a CGC Universal Grade of 6.0. Among the listed Disney comics is Donald Duck’s Vacation Parade, which features Donald Duck and his mischievous nephews. Several pencil and ink works are on offer from Carl Buettner, an artist who, at the start of his career, drew erotic cartoons for pulp magazines. He later worked on popular children’s comics. Other works in the collection depict Bambi, Cinderella, Mickey Mouse, and Bugs Bunny. View any of these lots and register to bid on Bidsquare