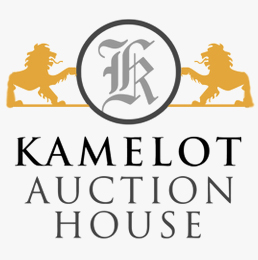 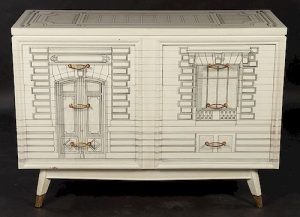 Day 1 of the Mid-Mod: Mid Century Auction, offered by Kamelot Auction House, is primarily a collection of fine and rare furniture of Mid-Century, modern style. Of the more valuable works at auction is a rare maple vanity and mirror by Silvio Cavatorta. Cavatorta was an Italian postwar and contemporary designer whose furnishings have realized prices in excess of $9,000.

Another fine piece for sale is a drawer commode painted in the Fornesetti, Style 6. Fornasetti was a versatile and prolific Italian artist, and although his works were usually produced as individual pieces. He was an important figure in Italian industrial design, and is best known for it more than his paintings and drawings, graphic designs. During his career he created over 13,000 works, making him responsible for one of the largest outputs of objects and furniture of the 20th century.

There are also a few chairs in this sale that are likely the work of Poul Kjærholm. Born in Østervrå, Denmark, Kjærholm began as a cabinetmaker’s apprentice with Gronbech in 1948. He then went on to the Danish School of Arts and Crafts in Copenhagen in 1952. From the mid-1950s, he worked for his friend Ejvind Kold Christiansen, an entrepreneur who gave him artistic freedom and produced many of his furniture designs. Kjærholm attracted international acclaim in 1958 for his contributions to the ‘Formes Scandinaves’ exhibition in Paris as well as being given the honor of the Lunning Award that same year for his PK22 chair.  View any of these lots and register to bid on Bidsquare.