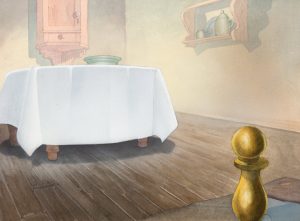 The Mickey Mouse and Friends – Animation Art Signature Internet Auction, offered by Heritage Auctions, is a collection of sketches and drawings from the animators of Walt Disney Studios. The collection includes various iconic characters from the Disney vault, including Mickey Mouse himself. One promotional sketch shows Mickey misspelling his own name. Visible is an animator’s graphite pencil correction.

Another early drawing depicts the disguised evil queen from Snow White and the Seven Dwarfs, preparing to offer a poisoned apple to Snow White. Also available is a production sketch of Princess Ariel, the fourth official member of the Disney Princess line-up and star of the animated feature The Little Mermaid. In this production sketch, Ariel is shown looking up as she first sets eyes on Prince Eric. View any of these lots and register to bid at Heritage Auctions.