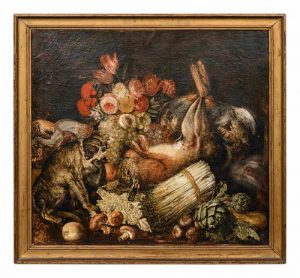 Memento mori means “remember that you will die” in Latin. The macabre phrase also inspired many still life vanitas attributed to Christiaan Luycks (1623 – 1675). His works often depicted human skulls scattered on tables alongside crowns and books. These images aimed to inspire a fear of death in the viewer. Luycks’ works often reflected on the transient nature of life. A still life oil on canvas (circa 1670) by Christiaan Luycks is available in Session I of the European Furniture and Decorative Arts auction, presented by Hindman. It depicts several animals laid out on a table alongside fish, flowers, and vegetables. Dark lighting sets the mood of the scene.

Among decorative furniture, a pair of Louis XVI-styled commodes will be available. Louis XVI was the last king of France, and these commodes represent the opulence the last royals experienced. The commodes from the early 1900s feature gilt bronze marquetry, parquetry, and marble tops. They were acquired from the Estate of Henri E. Nelson in Chicago. Fine art, jewelry, watches, and clocks are also available in the sale. Visit Bidsquare to view the catalog and place a bid.