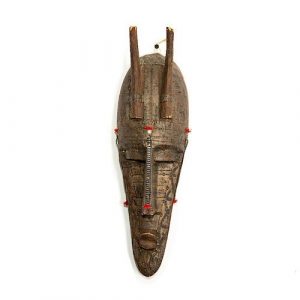 Whitley’s Auctioneers will offer the upcoming Masks, Marvels, and Mysteries auction at the end of January. In this sale, a selection of Japanese Meiji period vases, okimonos, and carved statues will be available. The Meiji era occurred between 1868 and 1912. Emperor Meiji (Mutsuhito) was known for his efforts to modernize Japan after years of isolation under the ruling military government. This industrializing era became known as the “Meiji Restoration.”

It was during this time that Japan built a powerful army and navy and established independence in its international affairs. Japanese art also changed. Formerly, it had consisted mostly of prints showing actors and scenic views. With the social, political, and cultural changes came a spectrum of subjects and styles that highlighted the country’s new transformation.

A Meiji period museum-quality vase by Makuzu Kozan is featured in the upcoming auction. The unusually shaped white porcelain vase features a blue dragon in different positions. A carved okimono is also showcased. This okimono depicts an adult skeleton with a child skeleton resting on its shoulders. Below the pair, a monkey holds the right leg of the adult and both figures hold a lotus flower. The monkey is symbolic of an undesirable person, while the flower represents love and compassion. Another item highlighted in the auction is a hand-carved Thai Buddhist Monk statue. This vintage statue was manufactured by Dessau Home. Visit Bidsquare to view the entire collection and to place a bid.