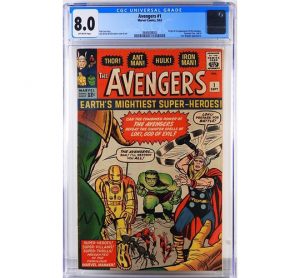 Bruneau & Co.’s upcoming Summer Comic, TCG, and Toy Auction is anchored by classic comic books, including Marvel Comics’ Avengers, Issue 1 from September of 1963. This comic represents the first appearance of The Avengers and also features the Fantastic Four, Loki, and the Teen Brigade. Other available comics include Amazing Spider-Man #14, X-Men #1, Strange Tales #110, and more. The sale also presents a selection of Trading Card Games (TCG), including more than 150 lots of unopened or rare Pokémon cards.

Toy collectors can also consider a selection of Universal Studios props, mock-ups, and on-screen items from the collection of Eric Baker. Formerly the creative lead of props and set dressing for the Wizarding World of Harry Potter at Universal Studios, Baker was also the prop master and fabricator for Nickelodeon in the 1990s. A screen-used Frankenstein operation game and a pair of prototype Shrunken Heads from the Harry Potter universe are among the leading lots. View any of these items and register to bid on Bidsquare.