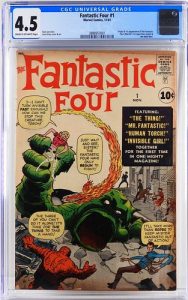 The upcoming Comic TCG & Toy Auction, presented by Bruneau & Co. Auctioneers, offers an eclectic collection of comics, including Marvel’s Incredible Hulk and DC’s Batman. One of the highlighted lots is an edition of The Fantastic Four produced in March of 1966. Stan Lee and Jack Kirby created the characters for Marvel Comics. The story revolves around an American team of superheroes: Ben Grimm, Reed Richards, Susan Storm, and her brother, Johnny Storm. During a journey through space, the four characters are exposed to cosmic rays, granting them superhuman abilities. The 1961 release of the first Fantastic Four comic boosted Marvel to great success.