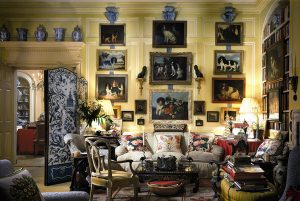 Interior designer Mario Buatta was well-known in the circles of the rich and famous, designing for the likes of Mariah Carey, Barbara Walters, and Malcolm Forbes. He made an industry breakthrough when he designed for the President’s Blair House guest quarters in Washington, D.C. Buatta’s fondness for chintz and over-the-top décor gave him a distinctly lavish style. Devoted to his work, Buatta would often spend years working on a single room. The New York Times quotes his design philosophy: “A room or a house has to come together the way a garden grows — a little bit today, a little bit tomorrow, and the rest when the spirit moves you.” The upcoming auction presented by Sotheby’s celebrates the “Prince of Interiors” with items from his personal residence and collection.

Many of the available lots reflect Buatta’s design style. A flower still life from Dutch master Jan van Os is a key lot. A leading still-life painter in the latter half of the 18th century, van Os painted this detailed flower arrangement in a glass goldfish bowl. The design community is particularly excited for the recognizable lots from Buatta’s Upper East Side apartment in New York. One such item is a blue and white wallpaper screen that the designer used to receive clients. Reportedly, he would “… hide behind the screen to eavesdrop whilst they discussed their reactions to his highly personal style.”

A black and gold lacquered Chinese bureau is another leading lot. This detailed piece from the 1730s came from a growing Eastern trend that imitated Western furniture and artistic design. Several whimsical pieces of decorative art are also available, including a pair of green wooden palm fronds standing over 11 feet tall and a Northern European tureen shaped like a cauliflower. Perched atop the vegetable is a small bird finial. View the complete catalog for this sale and register to bid by visiting the Sotheby’s website.