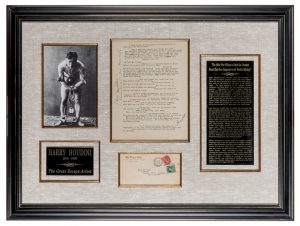 On November 14th, 1917, Harry Houdini wrote a letter to the curator of the Boston Public Library describing a tribute he and fellow magicians paid to Harry Kellar: “The affair was without a doubt the grandest event that ever happened in the world of mystery, and when we carried Kellar from the stage in a sedan chair and had about 50 men and women and children throw flowers at him, I saw him weep…” This letter, along with a later photograph of Houdini and other memorabilia, will be available in Potter & Potter Auctions’ upcoming Fall Magic Auction.

This sale particularly highlights books and magic apparatus. Among the notable lots is a copy of The Expert at the Card Table by S. W. Erdnase that was formerly in the library of the British Magical Society. Volumes 1-11 of Robert Albo’s Classic Magic series, each of which is from a limited and numbered edition, are also on offer. Several volumes include a signature from the author. Magic apparatus items include an Okito Checker Cabinet for the “magical transposition of a stack of checkers and a glass full of rice,” a portable quarter-sawn oak versa table by Jeff Busby Magic, and a jumbo Milson-Worth card guillotine made for James Beaver. View any of these lots and register to bid on Potter & Potter Auctions.