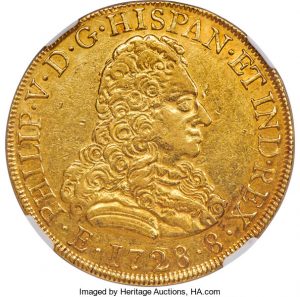 Numismatics will appreciate the 3,415 lots in the Long Beach Expo World Ancient Coins Signature Auction. The auction presented by Heritage Auctions features some of the best and rarest coins available.

Highlighted is the uncommon Philip V Escudos. This coin has an attractive amber chroma with light rose tones surrounding it. The coin remains bold and well preserved, despite being in circulation. The Aviuts  is also an extremely rare coin. This significant coin shows the bust of Avitus (Western Roman Emperor) on its front and the emperor in military attire, with sword in right hand and resting his left foot on a captive, on its back. The coin of Constantine XI Palaeologus is a historically important coin. Constantine XI ordered the vessels to be removed from the churches and melted down to make coins in order to pay the soldiers.

To view the entire catalog and to place a bid, visit Heritage Auctions today.