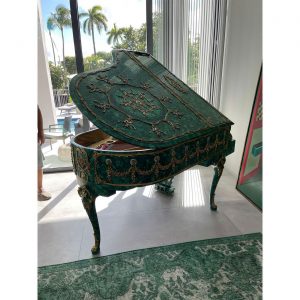 A Steinway & Sons grand piano with a malachite finish will lead the second day of Lion and Unicorn’s upcoming auction. This Model M mahogany piano was crafted in 1916. Known as a “Medium Grand,” Model M pianos can be found in conservatories, practice rooms, and home studios. Gilt accents decorate the available Model M. Bidders can also consider a more traditional Kohler & Campbell grand piano with a polished ebony finish.

The upcoming auction also offers a selection of fine art. An oil painting by Taras Loboda is among the key items. Issued in 2014, this painting shows a pale nude figure partially submerged in water. The figure’s rippled reflection adds abstraction to the piece. Taras Loboda, a Ukrainian artist based in Prague, is known for his figures of melancholy women. Maxim Antipov has described this trend in Taras Loboda’s work: “[He creates a] world of obvious reservations, piercing reticence when everything is stopped half a step before understanding, a moment before the solution.”

An early 20th-century portrait of a young woman by Italian painter Giovanni Boldini is available alongside a more contemporary piece from Haitian artist Montas Antoine. The colorful, untitled painting by Antoine depicts a village scene in bright shades of green, orange, and teal. Find the full auction catalog and place a bid on Lion and Unicorn’s website.