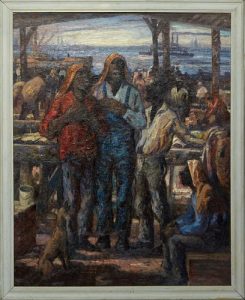 Knute Heldner was fascinated by the paintings that he observed throughout Europe while in the Swedish Navy. This inspired him to become a painter. After the navy, Heldner started his artistic training at Karlskrona Technical School and the National Royal Academy of Stockholm. He later became an internationally recognized artist of the 20th century. The first session of the upcoming Important Spring Estates Auction, offered by Crescent City Auction, will present work from Knute Heldner. The available painting shows a group of men singing in the middle of an open-air market with the St. Louis Cathedral in the background.

Another lot of interest is William Hemmerling’s New Orleans. Hemmerling was a self-taught American painter active between 2002 and 2009. “Although I don’t understand it, many people tell me that my art makes them happy and touches them in a spiritual way,” the artist said. “As I get older, I realized that ‘the something’ I was searching for is a closer walk with God through my art.” The available Hemmerling work from 2004 depicts two men playing clarinets. To find more information on these items, visit Bidsquare.