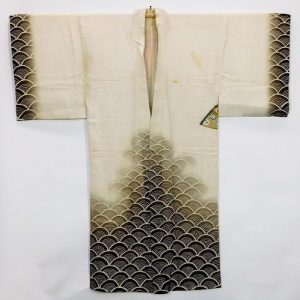 Alexander Murray’s personal collection of art and everyday items are available in the upcoming Bruneau & Co. Auctioneers offered event, the Kimono & Japanese Art auction. Kimonos from multiple eras are the most notable items. But despite the auction’s name, several lots span over 250 years of Asian history and come from places beyond Japan, most notably Tibet.

A blue silk kimono from the Meiji Period is the highest estimated lot. Hand-painted flowers decorate the arms, shoulders, and bottom of the piece. It was not until the Meiji period (1868-1912) that this article of clothing was even called a kimono. Another piece with a high estimated value is a navy blue silk kimono from the Edo period. During this era (1603–1868), the garment was called a kosode and was fashionable for both women and men to wear.

A Tibetan thangka painting of Buddha depicts White Tara, who is considered in Tibetan Buddhism to be the mother of all Buddhas. Thangka painting is a practice of painting Buddhist iconography on fabric, particularly cotton or silk. Another Tibetan lot is a bronze Buddha seated on a lotus base. Eyes appear on this figure’s forehead, hands, and feet to represent the Buddha’s all-seeing abilities. You can register to bid and view each lot in this auction on Bidsquare.