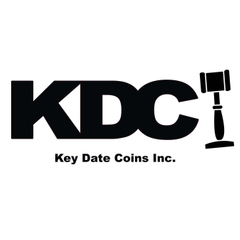 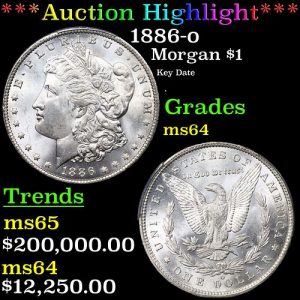 Two 19th-century Morgan dollar coins headline Key Date Coins’ upcoming auction. The first is an 1886-O Morgan dollar coin. Unlike other mintages, it is unclear why the 1886-O is so scarce. The New Orleans Mint struck nearly 11 million of these coins, but Silver Dollars & Trade Dollars of the United States estimates that only 350,000 of them at most are in collections. The example available in this auction never reached circulation and earned a grade of ms64.

The second Morgan dollar coin is from 1893. The New Orleans Mint struck fewer of these coins than any other Morgan-designed silver dollar, making its scarcity clearer than the 1886. For a brief period in the late 1940s and early 1950s, the Treasury Building slowly sold these coins off at face value. Now, Silver Dollars & Trade Dollars of the United States estimates only about 300 of them exist at an ms64 grade or above. This particular coin comes to auction at an ms64 grade, the same as the 1886-O.

Beyond the Morgan dollar coins, bidders will also find an 1858 Double Eagle $20 coin. The 1858 is an early example of the Double Eagle coin, with no motto presented on the backside and only “Twenty D.” printed to display its worth. Those interested in this or any other lot can register to bid on Bidsquare.