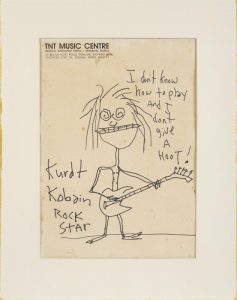 Rock ‘n roll emerged as a genre in 1954. Its popularity increased as musicians like Elvis Presley, Chuck Berry, Jerry Lee Lewis, Little Richard, and others took to the stage. Over the years, rock ‘n roll has taken on different sounds and styles but continues to thrive in the music industry. Julien’s Auctions will offer an array of rock ‘n roll collectibles, memorabilia, and more in its upcoming Rock ‘N Roll’s Music Icons auction. Among the lots are handwritten lyrics by Bob Dylan, Eric Singer’s stage-played drum set, and a Kurt Cobain self-drawn portrait.

Bob Dylan is a popular singer-songwriter and author. His musical career has spanned nearly 60 years and includes hits such as “Mr. Tambourine Man,” “Subterranean Homesick Blues,” and “Like a Rolling Stone.” Showcased in this auction are Dylan’s handwritten lyrics and chord annotations for “Lay Lady Lay.” This document appears to be a working draft as some verses do not appear in the song’s final version.

A major influencer of alternative rock and known as a voice for Generation X, Nirvana’s frontman and guitarist Kurt Cobain died of a self-inflicted gunshot wound in 1994. During the band’s 1992 Nevermind tour in Singapore, Cobain drew a picture of himself playing the guitar. He handwrote “Kurdt Kobain Rock Star” on the left and “I don’t know how to play and I don’t give a hoot!” on the right. To view and bid on these items and more, visit Julien’s Auctions.