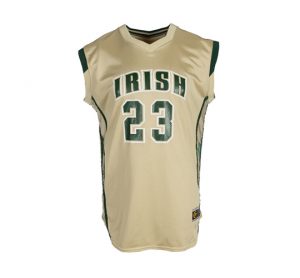 The February 18th, 2002 issue of Sports Illustrated featured a photo of high school basketball star and future NBA title winner LeBron James. The St. Vincent – St. Mary’s high school jersey from that very photoshoot is currently up for bid in the upcoming Sports Legends auction, offered by Julien’s Auctions. James wore the jersey during a game that evening and scored 32 points. A copy of “The Chosen One” Sports Illustrated issue accompanies the jersey.

Other basketball collectibles on offer include a Michael Jordan Fleer rookie card that has been rated PSA Gem Mint 10, as well as another copy of the same card rated BGS Mint 9. Bidders can also consider several pairs of signed Air Jordans and one of Jordan’s 1992 Olympic Dream Team game-worn jerseys.

The auction will present a selection of lots for soccer fans, including items from Diego Maradona. His signed and game-worn jerseys and boots for F.C. Barcelona are on offer. Collectibles related to or worn by Colin Kaepernick, Derek Jeter, Mariano Rivera, Babe Ruth, Tiger Woods, Kobe Bryant, and others round out the catalog. View any of these lots and register to bid on Julien’s Auctions.