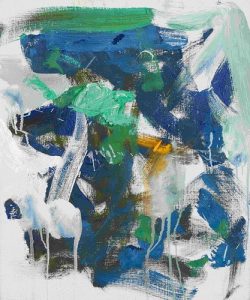 Through the 1980s, American Abstract Expressionist painter Joan Mitchell suffered numerous health problems, including cancer. Mitchell created an untitled painting in 1989 amid these health issues. The oil painting, which will come to auction with Hindman, reflects the artist’s late-career reflective mood. Shades of blue and aquamarine crisscross the canvas, interrupted by two strokes of mustard yellow. Hindman’s lot description notes that, for Mitchell, the painting is “the essence of the external world internalized, interpreted and expressed in paint, conveying a deeper and harder felt meaning.”

The upcoming sale will feature works from other key American artists of the 20th century. Alexander Calder’s Pyramidal Shapes painting from 1956 is particularly notable. Calder is best known as a sculptor of aesthetic mobiles, but he occasionally worked in two dimensions. The available Calder painting positions a pyramid in the foreground. Two lines balance on its peak, supporting a sphere and a half-moon on either side. Another pyramid and a white sphere draw the viewer’s eye to the composition’s vanishing point.