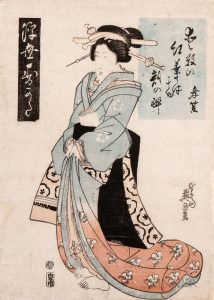 “To buy art, you really buy the energy of [the piece],” says Japanese-American artist Mayumi Oda. “I feel I have a very strong responsibility to make people exuberant, happy, [and] healthy.” Oda’s prints, including several available in the upcoming Japanese Prints Auction offered by Skinner, aim to empower women and are influenced by her spirituality and social activism.

From modern artists like Oda to more traditional printmakers such as Hashiguchi Goyo, Skinner’s Japanese Prints auction provides pieces from a wide range of Japanese artists. Goyo’s “Woman Holding a Tray” is among the pieces with the highest estimated value. Produced in 1920, the colored woodblock is on gray mica paper. Hashiguchi Goyo only began carving, printing, and publishing his work in 1918, less than three years before his death. The high quality combined with the tragically low supply of Goyo’s work, makes them valuable to many collectors.

Those seeking a slightly different lot should consider a collection of twenty-nine Japanese fairy tale books, all published by Takeshijiro Hasegawa. He was an innovative Japanese publisher who gave the world stories were based on well-known Japanese folk tales. View each of these lots and register to bid online on Skinner’s website.