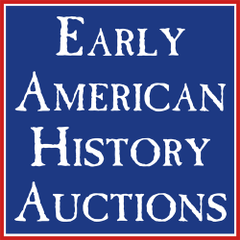 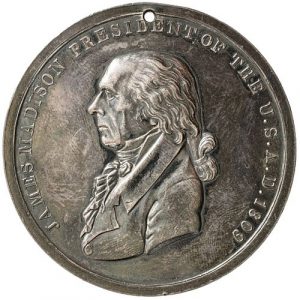 In early American history, colonial leaders regularly presented medals to Native American chiefs during negotiations. These items are commonly referred to as Indian peace medals. However, negotiations with Native American tribes were rarely in good faith. Often, the aim was not to build a genuine alliance but to placate the tribes.

An upcoming Early American History Auctions sale will present several Indian peace medals, including one from 1809. Decorating the front of this medal is President James Madison. The current president usually appears on the front of these medals, a tradition that began with Thomas Jefferson. On the back of this 1809 example, collectors will also notice a tomahawk and a pipe, representing an alliance between Americans and the tribes. This message is reinforced by the words “Peace and Friendship” and two figures shaking hands on the back of the Indian peace medal.

Americans were not the only ones who aimed to sway Native Americans with these medals. Another Indian peace medal in this auction comes from the British, who presented it to a Native American chief during the War of 1812. King George III appears on the front of the piece. The back is reserved for the Royal Coat of Arms. During the War of 1812, Tecumseh and his alliance of Native American tribes fought alongside the British, believing it to be their last chance to fend off American aggression. View the full catalog and register to bid on Bidsquare.