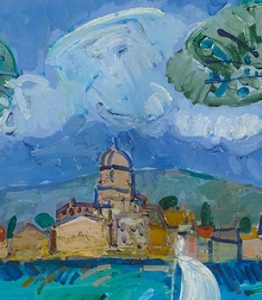 Art critic Louis Leroy originally coined the term “Impressionists” not to compliment the artists, but to insult them. However, what Leroy saw as the movement’s downfall, artists such as Renoir, Luce, and Fantin-Latour saw as its strength: the ability to capture the emotional impression of a moment instead of just its objective truth. The Impressionist & Modern Art Online auction offered by Sotheby’s encompasses not only fine art by the Impressionists, but also work from later generations influenced by the movement.

Among the most notable lots is a fragment from Renoir’s “Femme Se Coiffant”. The piece is considered noteworthy in the artist’s progression, and it is among the pieces copied for the forthcoming Renoir Digital Catalogue Raisonné. Impressionist Henri Fantin-Latour was known for his work with still life and group portraits. An example of the latter is the piece “Trois Baigneuses”, which is available in this auction. Work by notable Post-Impressionists in this auction include Henri Matisse’s “Nu Debout”. Matisse was an artist with many phases, from being one of les fauves (French for “the wild beasts”) to collages. This piece was made in 1930 when the artist was experimenting with simpler forms. Those interested can view and bid on any lot in the auction on Sotheby’s website until bidding closes the morning of July 24th.