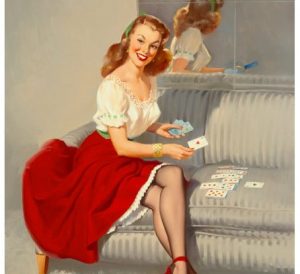 The Illustration Art Signature Auction, offered by Heritage Auctions, presents original art alongside pin-up posters, cover art, and other printed works. One of the available paintings is an untitled work by Patrick Nagel. An American artist who created popular illustrations, Nagel created work for both Playboy Magazine and the rock band Duran Duran. There are several examples of his work up for bid in this auction, many of which reflect his Art Deco style.

From the available pin-up art are several images by Gillette Elvgren, including A Put-Up Job, which was created for the 1955 Brown & Bigelow calendar. Elvgren was primarily a painter of advertisements and illustrations but was best known for his Brown & Bigelow pin-ups. Another well-known pin-up artist in the sale is Enoch Bolles, represented here by his Dancer illustration for Breezy Stories Magazine. Bolles was an early pin-up illustrator and was one of the most widely circulated in his time. Though he is known primarily as a pinup artist, Bolles was also a versatile advertising illustrator. View any of these lots and register to bid on the Heritage Auctions website.