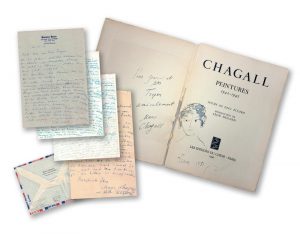 The Humanity / Inhumanity Auction, offered by Guernsey’s, is a small collection of items that links the holocaust with the civil rights movement. Among the remarkable items for sale is the “Voices of Independence,” a historic collection of documents that outline the future of the new Independent State of Israel as envisioned by the thirty-seven members of its Provisional Council on Friday, May 14, 1948. Each of the council’s thirty-five men and two women eventually signed the scroll that would act as the Israeli Declaration of Independence. The ideas put forth in the documents of this lot are those that shaped and that continue to shape the Israeli State.

A collection of letters written by early modernist artist Marc Chagall during and after the Holocaust, as well as a rare self-portrait is available. The letters, signed either “Marc Chagall” or the Chagalls are the correspondence between the Chagalls, Gen. Morris C. Troper, and Mrs. Ethel Troper. They were eminent figures of the American Jewish Joint Distribution Committee who were instrumental in helping the Chagalls immigrate to the United States in 1941.

Celebrating the life of Eugene B. Sloan is another collection. Sloan, a South Carolina reporter during the civil rights era, was always armed with his tape recorder. He is remembered for capturing key moments during the struggle for civil rights in the South. Also included in the collection is a recording, never before heard of the Rev. Dr. Martin Luther King addressing an audience at County Hall in Charleston on July 30, 1967, less than a year before his death. View any of these lots and register to bid on Invaluable