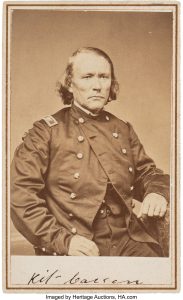 In the upcoming Historical Manuscripts sale presented by Heritage Auctions, Bret J. Formichi’s American ephemera collection is on display. This significant body of literature, letters, cartes de visite calling cards, and Civil War memorabilia is quite extensive. One standout lot is a set of two miniature portraits of Frances Clalin Clayton, a Missouri woman who fought for the Union in the American Civil War. Dressed as a woman in the first photo and a Union soldier in the second, Clayton directs a defiant gaze in both.

Another leading lot is an antique map of Texas endorsed by Jacob De Cordova. This colorful work shows the continual economic and industrial growth of the state, as viewed through the eyes of a successful Jewish-Jamaican immigrant. The ephemera featured in this sale are wide-ranging, from an airline boarding pass signed by Martin Luther King Jr. to a loan agreement signed by Al Capone. Global works are included as well, such as a royal pardon issued by Spain’s King Ferdinand and Queen Isabella. To explore these items and many more, visit Heritage Auctions and register to bid